I was lucky enough to attend an Innovation Games workshop facilitated by Luke Hohmann at SDEC12. If you get a chance to attend a workshop facilitated by Luke Hohmann, I encourage you to jump at the chance. I learned as much about facilitating workshops and sessions as I did about Innovation Games. It was fascinating and impressive seeing the attention to detail that Luke gave to every facet of the session. Everything in the session was well-prepared and all the activities reinforced the principles and concepts taught.

I especially appreciated the insights Luke gave into the psychology behind serious games and the methods behind them.

In the workshop we were able to try out the Product Box game. We used the idea of Google’s Internet-enabled glasses as a case study for the workshop. We had three separate teams that each designed their product boxes collaboratively and then presented them to everyone else to ‘sell’ them on what they felt was important.  The insights and innovations that were captured from that session were very powerful and impressive.

After the session I was very interested in trying the Product Box game in a real situation.

I am currently on a major systems integration project and I thought it would be interesting to use the Product Box game and combine it with the Remember the Future game to hold a retrospective on the current project. We had about 15 attendees that all were on the project in different roles. I spent quite a while trying to frame the question that I thought would allow for the most open thinking and ideas related to the project. I eventually settled on:

“Imagine we have completed the project and it was a huge success. The company is now trying to re-sell the solution we developed. Imagine that the solution could be sold on a store shelf. Design the box that would communicate the strengths and functionality of the product” 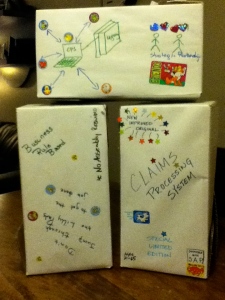 Just like we saw in the workshop, the ideas that were presented we truly original and delivered some insights that were unexpected. Here are a list of some of the capabilities the teams thought were important:

While some of these items were expected, I was surprised by some of them and also by the items that weren’t there. There was no mention of cost at all. One observation that Luke was that cost usually isn’t one of the first things people focus on, it is usually just about the functionality and capability.

Everyone that attended thoroughly enjoyed the session and they felt they benefited from the ideas generated. Everyone also agreed that this activity would be great to do with the business users at the start of every project to confirm/validate the business requirements and the relative importance of those business requirements. I can’t wait for the opportunity to use the Project Box game as part of a Project Charter meeting. I think it would generate excitement, enthusiasm, ideas, and a shared vision as part of a project charter.

When is the last time a Project Charter Meeting could say that?